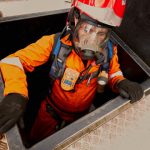 With the T4x Crowcon has extended the sensor capabilities for their widely used T4 portable multi-Gas detector. Equipped with its new MPS™ and LLO2 sensors, along with a dual toxic sensor, the capability of the now named T4x portable gas detector has been greatly extended.

For quite some time, gas sensor technology has lagged against the demands for improved safety requirements, lower cost of ownership, and the need to reduce environmental impacts. The improvements made to Crowcon’s popular T4 gas monitor (now the T4x), go a long way in addressing these issues by providing cutting edge sensor technologies that modern applications demand.

Worrying data from the HSE reports that 142 workers lost their lives at work in the United Kingdom between 2020 and 2021, an increase of 29 from the previous year.

These figures highlight the need to increase safety levels alongside stricter levels of compliance within the industry. The T4x provides a huge boost to operations teams by reducing the number of sensor replacements by 75% whilst simultaneously increasing overall sensor reliability.

By ensuring a greater level of site-wide compliance, the T4x helps health and safety managers by eliminating the need to calibrate each device for the relevant flammable gas as the T4x can accurately detect up to 19 gases at once.

The T4x has double the battery life of its previous incarnation and is poison resistant; meaning that the five-year total cost of ownership is 25% lower and saves 12g of lead per detector making it far easier to recycle.

With the enhanced combination of three sensors (including that of two new technologies) within an already popular portable multi-gas-detector, Crowcon has increased safety levels, reduced costs and improved efficiency of both individual units, and entire fleets.

Additionally, the T4x offers a longer life with much higher accuracy for gas-hazard detection, whilst providing a more sustainable build.

Get the latest news, discounts & more!